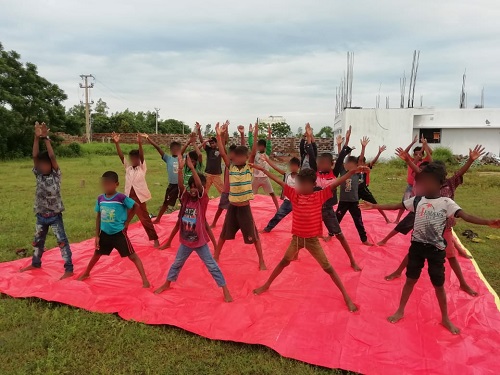 PUNARJIBAN which literally translates as re-born is a camp project by SOCH to rehabilitate the children who had run-away from their homes many times, have been addicted to substances and have been leading the life of a street child.  The camp is a one month process of in-house rehabilitation of where such children are made aware of the adversity of staying in the streets, the necessity of the care and love of the parents and are equipped with necessary life skills to realize their dreams in future.

Objectives of the project:

SOCH understands the harmful effects of street living on children.  Children, who have a history of repeated running away from home, are addicted to substances and display hard behaviour, are selected for the purpose of attending the PUNARJIBAN camp.

Along with Bhairabi Club, DCPU Khurda SOCH team identified such children who had been previously residing in the open shelter of Bhairabi Club.  Based on this process, 20 boys were selected to attend the camp which was organised in the Bhairabi club from 11th February, 2016 to 8th March, 2016.

The camp was organized by four able and well skilled SOCH staffs who undertook the following schedule for the benefit of the children. One of them functioned as the camp teacher while the other three assisted him during various activities. The various activities in camp included the shelter as well counseling activities.

Breakfast, lunch, evening snacks and dinner were aimed at inculcating the values of community living among them. Apart from a healthy food for a better physical health, the children in camp started sharing a great bond and developed friendships during these meals. Moreover, the four SOCH staff could bond with them over these meal times.

“Silencing the mind is the greatest ordeal for a human being. It is the key to success.” -Gita

Having a good concentration and developing a healthy mind is an integral part of a child’s development. Aimed at the holistic well-being and development of the child, about half an hour in the morning was devoted to the yoga and meditation classes. These relaxation techniques helped in controlling the emotions that led to banger and hurt towards their family members or others.

“Education is the doorway to the outer world”

The children were imparted non-formal education by the SOCH staff. The identification of English alphabets, birds and animals were some of the topics that were covered under this. The SOCH staff took special effort to manage the classes where children from different backgrounds could be absorbed.

A special schedule was made by the SOCH staff to impart certain values to the children through story telling sessions. The stories were related to four important domains. Each story had a one week time to be told to the children, discussed among them and to counsel them on the aspects that might have led to emotional distress among them.

The four domains were:

Since the children had been exposed to the worst adversities of life due to the unsafe and unprotected environment that they have faced during their stays on platforms and streets, it is necessary to talk to them about the difference between the good and bad environment. During these sessions, some children developed the insight about the differences in these two environments. Along with insight building, these story telling sessions facilitated the individual counselling sessions with the children.

Difference between the lives of school going child, platform child and working child:

Stories were used to collaboratively facilitate the child to identify the differences between a school going child in contrast to the child who has run-away and is leading an unsafe life in the railway platforms. The issues of addiction were addressed in these sessions. Moreover, stories regarding the life of a child who had been forced into child labour and has suffered abuse in the hands of his employer led the child to introspect about the consequences of running away from their homes.

The third session was aimed at developing a positive impression of their parents and caregivers among the children. The session was a great success as many children identified with the characters in the stories and cried during the session.  Later on, in the individual sessions, many children gave their valid address. This led to successful address tracing of the children.

The children had adopted a street life, were out of the protected net of their parents since weeks and months. They might have lost track and gone astray. So it was necessary to develop a realistic and constructive future orientation among them wherein they can plan and work towards a better future.

Along with various programs, children were given one hour for their leisure. The children were allowed to play various indoor as well as outdoor activities for entertainment. Along with leisure, the games incorporated friendliness among the children in the camp.

The JYOTI program was a value imparting program where a candle was kept in front of the children. Every day, certain value was imparted to the children during Jyoti program. Discussions regarding a better future without lies, obedience regarding elders and parents were done during this program. At the end of the program, the children pledged to adopt the discussed positive value in their life

Special attention is given to the children’s health. Medication as per their requirement is given to all the children. Moreover, a special time for medication is kept so as to create discipline and responsibility among the children regarding their own health.

Address tracing of the children starts as soon as the child reveals landmarks related to his parents or home. A part of SOCH team is engaged in the process of tracing the family members of the children. The moral story sessions on the Favorite God had an impact on the children and thus, they gave addresses to the SOCH team, whereby efforts were made to contact their parents so as to reunite them with their families. A reunion ceremony was held at the end of the camp so as to reunite the children with their parents. Required parent counseling was given to the parents.

Children, whose addresses couldn’t be traced or were found to be orphans were referred to various institutions for a safer life. Apart from these, there were some children whose narratives showed some directions regarding their address. Since the address tracing is still in process and there is hope of reuniting them with the family members, they were sent back to Bhairabi Club to stay in the open shelter till their addresses are traced.

It is planned to have a follow up for the children reunited with their family through telephone or by physical visit. Those referred to institutional care will be followed up through one-time telephonic interview. 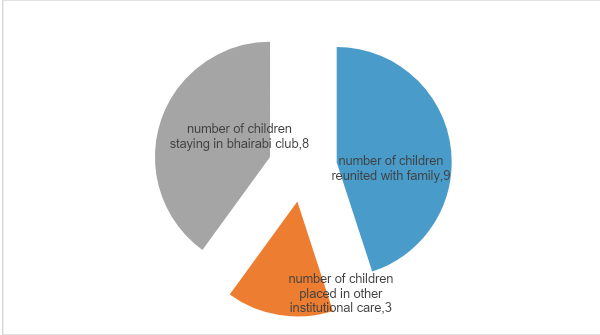 A reunion ceremony was organised by SOCH team in collaboration with BHAIRABI CLUB and DCPU (Khurda) with support from friends of the children of Orissa. It was aimed at celebrating the reunion of the children who were a part of the Punarjiban project and could be successfully reunited with their family as a result of it. The first reunion ceremony was attended by renounced persons. Shri Niranjan Sahu, Collector and DM, Khurda as chief guest, while Shri Krupasindhu Mishra, the ADM, Khurda and Mrs. Banishree Pattnaik, DCPO were the guest of Honours for the ceremony.  Prof. Malcom Harper, the Chairman of the Friends of Orissa attended the ceremony as the chief speaker.

Prakash Motu (Name Changed), aged 15 yrs is an illiterate boy. Prakash’s father is a daily labourer while his mother collects leaves from the jungle. Prakash has one brother and two sisters who are continuing their studies. The hand to mouth existence of his family incited his parents to pressurize him to start working.

Prakash then in spite of his reluctance went to Rourkela and started working in the hotel. Here he was asked to buy wines from a shop and serve the customers in that hotel. He became habituated with the work and he started consuming alcohol himself. This had a soothing effect on this mind and body.

One day when Prakash was watching TV, his hotel manager ventured into his room, and on seeing Prakash watching TV, he rebuked him for wasting time and getting careless with his work. The chided manager had left a deep scar in Prakash‘s heart and mind, so he decided to run away from the confinement of this hotel and so did he.

He ran away and landed at Khurda railway station to be rescued by SOCH team vigilant at the station. After a brief counselling session Prakash was then referred to Project Punarjivan Modification camp running at Open Shelter of Bhairabi club for further care and attention.

Prakash’s conversation with the Staffs was quite friendly and positive. It made the camp team aware of his persona as an extrovert who likes to socialize with people. His eyes sparkle on sharing the camp experience. He is very jubilant on describing the cooperation and care received from the people in this camp. The exercises and yoga taught here makes him relaxed and free of agitation.

Children like Prakash need proper guidance, support and love from their elders. Parents should understand the desire of a child and allow them to chase their dreams, instead of burdening them with responsibilities which can make their future bleak.

During the celebration of family reunion the child was happily reunited with his loving family.

Chinghdu fled from his home about 7 times. He was not at all interested to stay at home as he was always beaten up by his parents for loitering here and there. In the beginning, he ran away from his home to Salia Sahi to stay at his brother’s home. He stayed there for 1 month. Chinghdu’s fickleness triggered him to run away from his brother’s home along with his friend Ravi for the second time. He moved to Jaydev vihar, stayed there for 3 months. Fortunately, he was rescued by the policemen and transferred to Ruchika CCI, where he stayed for 5 months. His childhood agility prompted him to flee from the CCI, but he was rescued and brought to Bhairabi club, where he stayed for 1 month. He had been away from his home for 10 months.

Chinghdu is happy to share his experience in the camp. He gladly speaks that his teachers are cooperative, imparting moral values, teaching Yoga, and helping him to change his behavior and attitude. He enjoys playing cricket with the camp children. The

Camp life has a positive impact on the child’s mind.

Chinghdu has not been reunited with his family and continues to stay at CCI. We suggest his parents provide proper care and attention to the child, understand his needs and wishes, provide him better education, and set a bright future for him.